Widely used common names include eastern baccharis, groundsel bush, sea myrtle, and saltbush, with consumption weed, cotton-seed tree, groundsel tree, menguilié, and silverling also used more locally. In most of its range, where no other species of the genus occur, this plant is often simply called baccharis.

Baccharis halimifola was first described and named by Carl Linnaeus in his Species Plantarum, published in 1753. No subspecies or varieties are recognized within the species.

This species is the northernmost member of the large Western Hemisphere genus Baccharis in the aster family (Asteraceae).

Senecio arborescens, a Neotropical species, was confused with Baccharis halimifolia in the past.Template:Citation needed 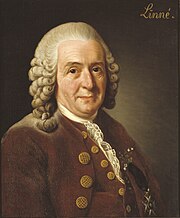 Baccharis halimifolia is a fall-flowering shrub growing to about 12 ft (4 m) high and comparably wide, or occasionally a small tree. Its simple, alternate, thick, egg-shaped to rhombic leaves mostly have coarse teeth, with the uppermost leaves entire. These fall-flowering Baccharis plants are dioecious, with male and female flowers on separate individuals. Their flowers are borne in numerous small, compact heads in large leafy terminal inflorescences, with the snowy-white, cotton-like female flower-heads showy and conspicuous at a distance.<ref name=Tiner>Template:Cite book</ref><ref name=BhalimFla>Template:Cite web</ref>

Baccharis halimifolia, usually found in wetlands, is unusually salt-tolerant, and often found along salty or brackish shores of marshes and estuaries, and the inland shores of coastal barrier islands. In Florida, it is also found along ditches, in old fields, and in other disturbed areas.<ref name=BhalimFla/> Other habitats in the northeastern United States include freshwater tidal marshes and open woods and thickets along the seacoast.<ref name=Tiner/>

In Australia, B. halimifolia is an invasive species along the coast of southern Queensland and New South Wales.<ref name="fna"/> As biological control the rust fungus Puccinia evadens is used.<ref>Jim Cullen, Mic Julien, Rachel McFadyen: Biological Control of Weeds in Australia. Csiro Publishing, 2012. Seite 91f</ref> The species has also become naturalized in Europe<ref name=BhalimFla/> and in New Zealand.<ref name=BhalimFla/>

In the northeastern United States, the species has become common well inland of the shrub's natural range along various major highways where road salt is heavily used,<ref name=PennaBaccharis>Template:Cite web</ref> sometimes forming conspicuous displays when flowering in the fall, as along I-95 in Howard County, Maryland.

Baccharis halimifolia is occasionally cultivated, useful as a hedge or border as well as a specimen plant.<ref name=BhalimFla/> In southern Louisiana, it has been traditionally used as a medicine to treat inflamed kidneys and fever.<ref>http://www.botanical.pbrc.edu/pdf/Brassieur%20Medicinal%20Plants.pdf</ref>