Bombax ceiba, like other trees of the genus Bombax, is commonly known as cotton tree. More specifically, it is sometimes known as red silk-cotton; red cotton tree; or ambiguously as silk-cotton or kapok,<ref>Template:Cite web</ref> both of which may also refer to Ceiba pentandra.

This Asian tropical tree has a straight tall trunk and its leaves are deciduous in winter. Red flowers with 5 petals appear in the spring before the new foliage.<ref>Template:Cite web</ref> It produces a capsule which, when ripe, contains white fibres like cotton. Its trunk bears spikes to deter attacks by animals. Although its stout trunk suggests that it is useful for timber, its wood is too soft to be very useful.

Bombax ceiba grows to an average of 20 meters, with old trees up to 60 meters in wet tropical regions. The trunk and limb bear numerous conical spines particularly when young, but get eroded when older. The leaves are palmate with about 6 leaflets radiating from a central point (tip of petiole), an average of 7~10 centimeters wide, 13~15 centimeters in length. The leaf's long flexible petiole is up to 20 cm long. 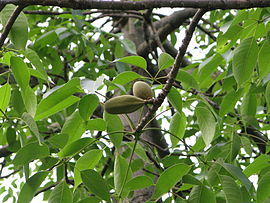 The fruit, which reaches an average of 13 centimeters in length, is light-green in color in immature fruits, brown in mature fruits.

The tree is widely planted in southeastern Asian countries (such as in Vietnam, Malaysia, Indonesia, southern China and Taiwan, etc.) According to Chinese historical record, the king of Nam Yuet (located in the southern China and northern Vietnam nowadays), Zhao Tuo, gave a tree to the emperor of the Han dynasty in the 2nd century BC.

This tree is commonly known as semal (Template:Lang-hi), shimul (Template:Lang-bn) or ximolu (Assamese: শিমলু) in India. It is widely planted in parks and on roadsides there because of its beautiful red flowers which bloom in March/April. This tree is quite common in New Delhi although it doesn't reach its full size of 60m there because of the semi arid climate. The cotton fibers of this tree can be seen floating in the wind around the time of early May. This tree shows two marked growth sprints in India: in spring and during the monsoon months. Perhaps due to subtropical climate and heavy rainfalls, it's found in dense population throughout the Northeast India.

This tree is also found in the eastern parts of Pakistan, especially in the eastern city of Lahore. The local Urdu and Punjabi names for the tree is sumbal, semal, sainbhal.

The 1889 book 'The Useful Native Plants of Australia records that the tree was at that time known as Bombax malabaricum, and its common names included 'Simool Tree;or 'Malabar Silk-cotton Tree of India' and that the calyx of the flower-bud is eaten as a vegetable in India."<ref>Template:Cite book</ref>

Template:See also Bombax ceiba is literally known as “cotton-tree flowers” (Template:Zh; Cantonese Jyutping: Muk6 min4 faa1) in China, playing a vital role in Southern Chinese, especially Cantonese, culture. It is also the official flower of Guangzhou, the capital of Guangdong Province in southern China. With some trees flowering from late February to early May. Fruiting can start as early as March. At the peak of its flowering season, elderly people could often be found picking flowers off the ground to dry, which later could be used to make a type of tea or soup. The flowers are very attractive to local wildlife, with many birds like the Japanese white-eye, a type of fruit eating bird, which often draws a hole in an unopened Bombax ceiba flower bud. Honey bees, and bumble bees also attracted to the flowers to collect pollen and nectar. Because the flowers attract many insects, crab spiders can be occasionally found on a fully opened flower, hunting bees. 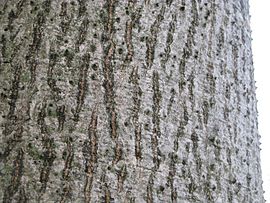 Up-close view of a typical, undisturbed bark in Hong Kong.