Cassia fistula, known as golden rain tree, canafistula, and other names, is a flowering plant in the family Fabaceae. The species is native to the Indian subcontinent and adjacent regions of Southeast Asia. It ranges from eastward throughout India to Myanmar and Thailand and south to Sri Lanka and southern Pakistan. It is the state flower of Kerala in India and of immense importance amongst the Malayali population. It is a popular ornamental plant and is also used in herbal medicine. In ancient Tamil literature, it is called கொன்றை (kondrai) and is closely associated with the Mullai (forest) region of Sangam landscape. It is the national tree of Thailand, and its flower is Thailand's national flower. 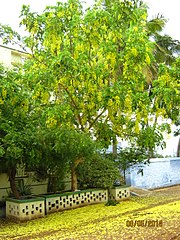 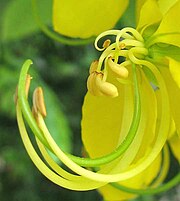 A flower in Chandigarh, India

C. fistula is widely grown as an ornamental plant in tropical and subtropical areas. It blooms in late spring. Flowering is profuse, with trees being covered with yellow flowers, many times with almost no leaf being seen. It grows well in dry climates. Growth for this tree is best in full sun on well-drained soil; it is relatively drought-tolerant and slightly salt-tolerant. It will tolerate light brief frost, but can get damaged if the cold persists. It can be subject to mildew or leaf spot, especially during the second half of the growing season. The tree blooms better with pronounced differences between summer and winter temperatures.<ref name="ayer"> Template:Citation</ref>

Various species of bees and butterflies are known to be pollinators of C. fistula flowers, especially carpenter bees (Xylocopa sp.).<ref>Murali, KS (1993) Differential reproductive success in Cassia fistula in different habitants-A case of pollinator limitations? In: Current Science (Bangalore), 65 (3). pp. 270-272.</ref> In 1911, Robert Scott Troup conducted an experiment to determine how the seeds of C. fistula are dispersed. He found that golden jackals feed on the fruits and help in seed dispersal.<ref>Troup, R.S. (1911).Silviculture of Indian Trees. Published under the authority of His Majesty’s Secretary of State for India in Council. Oxford Clarendon Press</ref>

In Ayurvedic medicine, the golden shower tree is known as aragvadha, meaning "disease killer". The fruit pulp is considered a purgative,<ref>Template:Cite book</ref><ref>Template:Cite book</ref> and self-medication or any use without medical supervision is strongly advised against in Ayurvedic texts. Though it has been used in herbalism for millennia, little research has been conducted in modern times, although it is an ingredient in some mass-produced herbal laxatives.

The golden shower tree is the state flower of Kerala. The flowers are of ritual importance in the Vishu festival of Kerala, and the tree was depicted on a 20-rupee stamp. The golden rain tree is the national flower of Thailand; its yellow flowers symbolize Thai royalty. A 2006–2007 flower festival, the Royal Flora Ratchaphruek, was named after the tree, which is known in Thai as ratchaphruek (Thai: ราชพฤกษ์) and the blossoms commonly referred to as dok koon (Thai: ดอกคูน). C. fistula is also featured on a 2003 joint Canadian-Thai design for a 48-cent stamp, part of a series featuring national emblems.<ref name="ayer"/> Cassia acutifolia, the pudding-pipe tree, furnishes the cassia pods of commerce.<ref> U. S. Department of Agriculture, William Saunders; Catalogue of Economic Plants in the Collection of the U. S. Department of Agriculture; Washington D. C.; June 5, 1891 </ref>

In Laos, its blooming flowers known locally as dok khoun are associated with the Lao New Year. People use the flowers as offerings at the temple and also hang them in their homes for the New Year in belief that the flowers will bring happiness and good luck to the households.<ref>Lao NEWS on LNTV: When the golden shower trees, known as Dok Khoun in Laos blossom.17/4/2014</ref>

Being so conspicuous and widely planted, this tree has a number of common names. In English, it is known as the golden shower,<ref>Template:PLANTS</ref> purging cassia,<ref name=BSBI07>Template:Cite web</ref> Indian laburnum or golden shower cassia. It is known in Spanish-speaking countries as caña fistula.