Coffea arabica (Template:IPAc-en), also known as the Arabian coffee, "coffee shrub of Arabia", "mountain coffee", or "arabica coffee", is a species of Coffea. It is believed to be the first species of coffee to be cultivated, and is the dominant cultivar, representing some 60% of global production.<ref name="CoffeeProduction">Template:Cite web</ref> Coffee produced from the less acidic, more bitter, and more highly caffeinated robusta bean (C. canephora) makes up the preponderance of the balance.

Coffea arabica is the only polyploid species of the genus Coffea, as it carries 4 copies of the 11 chromosomes (44 total) instead of the 2 copies of diploid species. Specifically, Coffea arabica is itself the result of a hybridization between the diploids Coffea canephora and Coffea eugenioides,<ref>Template:Cite journal</ref> thus making it an allotetraploid, with two copies of two different genomes.

Endemic to the mountainous regions of Yemen and the southwestern highlands of Ethiopia.<ref>Template:Cite book</ref> C. arabica is now rare in Ethiopia, while many populations appear to be of mixed native and planted trees. In Ethiopia, where it is called būna, it is commonly used as an understorey shrub. It has also been recovered from the Boma Plateau in South Sudan. C. arabica is also found on Mount Marsabit in northern Kenya, but it is unclear whether this is a truly native or naturalised occurrence.Template:Sfnp The species is widely naturalised in areas outside its native land, in many parts of Africa, Latin America, Southeast Asia, China, and assorted islands in the Caribbean and in the Pacific.<ref>Kew World Checklist of Selected Plant Families, Coffea arabica</ref>

The conservation of the genetic variation of C. arabica relies on conserving healthy populations of wild coffee in the Afromontane rainforests of Ethiopia. Genetic research has shown coffee cultivation is threatening the genetic integrity of wild coffee because it exposes wild genotypes to cultivars.<ref>Template:Cite journal</ref> Nearly all of the coffee that has been cultivated over the past few centuries originated with just a handful of wild plants from Ethiopia, and today the coffee growing on plantations around the world contains less than 1% of the diversity contained in the wild in Ethiopia alone.<ref name="Saving Coffee">Template:Cite journal</ref>

Botanical drawing of Coffea arabica, around 1860 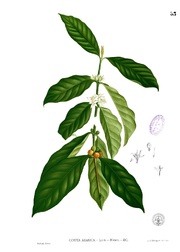 Botanical drawing of C. arabica, dating from around 1880.

Arabica coffee's first domestication in Ethiopia is obscure, but cultivation in Yemen is well documented by the 12th century.<ref>Template:Cite book</ref>

Coffea arabica accounts for 60% of the world's coffee production.<ref name="CoffeeProduction"/>

C. arabica takes approximately seven years to mature fully, and it does best with 1.0–1.5 meters (about 40–59 inches) of rain, evenly distributed throughout the year.Template:Citation needed It is usually cultivated between 1,300 and 1,500 m altitude,Template:Citation needed but there are plantations that grow it as low as sea level and as high as 2,800 m.<ref name="Schmitt2006">Template:Cite book</ref>

The plant can tolerate low temperatures, but not frost, and it does best with an average temperature between Template:Convert.<ref name="Obso2006">Template:Cite book</ref> Commercial cultivars mostly only grow to about 5 m, and are frequently trimmed as low as 2 m to facilitate harvesting. Unlike Coffea canephora, C. arabica prefers to be grown in light shade.Template:Citation needed

Two to four years after planting, C. arabica produces small, white, highly fragrant flowers. The sweet fragrance resembles the sweet smell of jasmine flowers. Flowers opening on sunny days result in the greatest numbers of berries. This can be problematic and deleterious, however, as coffee plants tend to produce too many berries; this can lead to an inferior harvest and even damage yield in the following years, as the plant will favor the ripening of berries to the detriment of its own health.

On well-kept plantations, overflowering is prevented by pruning the tree. The flowers only last a few days, leaving behind only the thick, dark-green leaves. The berries then begin to appear. These are as dark green as the foliage, until they begin to ripen, at first to yellow and then light red and finally darkening to a glossy, deep red. At this point, they are called "cherries," which fruit they then resemble, and are ready for picking.

The berries are oblong and about 1 cm long. Inferior coffee results from picking them too early or too late, so many are picked by hand to be able to better select them, as they do not all ripen at the same time. They are sometimes shaken off the tree onto mats, which means ripe and unripe berries are collected together.

The trees are difficult to cultivate and each tree can produce from 0.5 to 5.0 kg of dried beans, depending on the tree's individual character and the climate that season. The most valuable part of this cash crop are the beans inside. Each berry holds two locules containing the beans. The coffee beans are actually two seeds within the fruit; sometimes, a third seed or one seed, a peaberry, grows in the fruit at tips of the branches. These seeds are covered in two membranes; the outer one is called the "parchment coat" and the inner one is called the "silver skin."

On Java Island, trees are planted at all times of the year and are harvested year round. In parts of Brazil, however, the trees have a season and are harvested only in winter. The plants are vulnerable to damage in such poor growing conditions as cold or low pH soil, and they are also more vulnerable to pests than the C. robusta plant.<ref>"Coffee: The World in Your Cup." Seattle, WA: Burke Museum at the University of Washington.</ref>

Arabica coffee production in Indonesia began in 1699. Indonesian coffees, such as Sumatran and Java, are known for heavy body and low acidity. This makes them ideal for blending with the higher acidity coffees from Central America and East Africa.

In Hawaii, coffee was formerly more widely grown than at present, and it persists after cultivation in many areas. But in some valleys, it is a highly invasive weed.<ref>Template:Cite web</ref> In the Udawattakele and Gannoruwa Forest Reserves near Kandy, Sri Lanka, coffee shrubs are also a problematic invasive species.<ref>Template:Cite journal</ref>

It is expected that a medium-term depletion of indigenous populations of C. arabica may occur, due to projected global warming, based on IPCC modelling.<ref>Template:Cite journal</ref>

According to journalist Herbert van der Vossen, potential risks to arabica production due to climate change are being anticipated and planned for through the development of next-generation varieties. Risks to coffee arabica include a changing climate, rising temperatures, longer droughts and excessive rainfall.<ref>Template:Cite journal</ref>

The first written record of coffee made from roasted coffee beans comes from Arab scholars, who wrote that it was useful in prolonging their working hours. Yemen's close proximity to Ethiopia meant that the two nations engaged in trade so it is natural that this beverage first spread to the Yemeni people from the highlands of Ethiopia.<ref>https://www.aromacoffee.ae</ref> It later spread first among the Turks, and later on found its way around the world. Other scholars believe that the coffee plant was introduced into Yemen from Ethiopia, based on a Yemeni tradition that slips of both coffee and qat were planted at 'Udein' ('the two twigs') in Yemen in pre-Islamic times.<ref>Western Arabia and the Red Sea, Naval Intelligence Division, London 2005, p. 490 Template:ISBN</ref>

Coffea arabica was first described by Antoine de Jussieu, who named it Jasminum arabicum after studying a specimen from the Botanic Gardens of Amsterdam. Linnaeus placed it in its own genus Coffea in 1737.<ref>Template:Cite book</ref>