Commelina communis, commonly known as the Asiatic dayflower, is an herbaceous annual plant in the dayflower family. It gets its name because the blooms last for only one day.<ref>Template:Cite web</ref> It is native throughout much of East Asia and northern parts of Southeast Asia. In China, the plant is known as yazhicao (Template:Zh),<ref name=chinaflora/> roughly translating to "duckfoot herb", while in Japan it is known as Template:Nihongo,<ref name=JAANUS/> meaning "dew herb". It has also been introduced to parts of central and southeastern Europe and much of eastern North America, where it has spread to become a noxious weed. It is common in disturbed sites and in moist soil. The flowers emerge from summer through fall and are distinctive with two relatively large blue petals and one very reduced white petal.

The Asiatic dayflower plant serves as the type species for its large genus. Linnaeus picked the name Commelina in honour of the two Dutch botanists of the Commelijn family, using the two large showy petals of Commelina communis to symbolise them. Linnaeus described the species in the first edition of his landmark work, Species Plantarum, in 1753. Long before the plant was studied in Europe, however, it had been used for generations in traditional Chinese medicine. The flowers have also been used in Japan to produce a dye and a pigment that was used in many world-renowned Ukiyo-e woodcuts from the 18th and early 19th centuries. In the modern era the plant has found limited use as a model organism in the field of plant physiology due to its complex pigment chemistry and the ease of viewing its stomata.

The Asiatic dayflower is considered a weed both in areas where it was introduced and in certain parts of its native range. The flowers' interactions with pollinators have been well studied and have helped to support important hypotheses about pollination in the field of plant ecology. Recent research has also revealed that the Asiatic dayflower can bioaccumulate a number of metals, making it a candidate for revegetating and essentially cleaning spoiled copper mines. Several animals and fungi use the plant as a food source, with a few species feeding upon it exclusively. 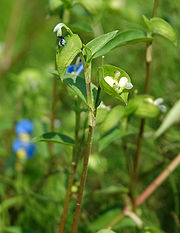 The two large blue petal limbs and their claws attaching them to the floral axis are visible; the smaller lower white petal is mostly obscured; the three yellow staminodes with central maroon spots are above, the central fertile stamen with maroon connective is below them, and the two brown lateral fertile stamens and the curving style between them are lowest; notice the contrasting veins on the spathe surrounding the flower

Commelina communis was first described in 1753 by Carl Linnaeus in the first edition of his Species Plantarum, along with eight other species in the genus.<ref name=flora/><ref>Template:Citation</ref> The plant serves as the type species for the genus. The scientific name Commelina was chosen based on the Asiatic dayflower. Linnaeus picked the name in honour of the Dutch botanists Jan and Caspar Commelijn, using the two large showy petals of Commelina communis to symbolise them.<ref name=flora/> A number of names given to plants thought to be different species have fallen into synonymy with the Asiatic dayflower. Albrecht Wilhelm Roth created the first such synonym, Commelina polygama, in 1790.<ref name=taiwan/><ref name=mansfeld/> Wenceslas Bojer described what he believed were two new species, Commelina barabata and Commelina salicifolia, in his work Hortus Mauritianus, both of which were quickly found to be identical to C. communis.<ref name=mansfeld>Template:Citation</ref> Karl Sigismund Kunth created the synonym Commelina willdenowii in 1841.<ref name=mansfeld/> Finally, Korean populations of the species were named under the synonym Commelina coreana in 1910 by Augustin Abel Hector Léveillé.<ref name=mansfeld/>

Several varieties have also been named. Commelina communis var. ludens was created by C.B. Clarke after demoting it from the full species status in which it was placed by Friedrich Anton Wilhelm Miquel in 1861.<ref name=flora/><ref name=mansfeld/> The variety is distinguished by its darker flowers, antherodes with central maroon spots, less well developed distal cymes that usually do not produce a flower, and spathes that are proportionally broader.<ref name=flora/> Jisaburo Ohwi's Flora of Japan also treats the variety as geographically distinct, stating that it is restricted to mountainous areas.<ref name=ohwi/> This variety is still accepted by some workers, but others, such Robert B. Faden, consider it impossible to consistently separate from the type variety.<ref name=flora/> Another variety, C. communis var. hortensis, which was named by Tomitaro Makino and is apparently a cultivated variety which originated from C. communis var. ludens in Japan, is also accepted by some botanists.<ref name=pennell/> It differs in having larger showy flowers which are used to produce a dye (see "Uses" section below).<ref name=ohwi/> A variegated form called C. communis var. ludens f. aureostriata named by Frank C. MacKeever in 1961 is known to occur randomly throughout much of the species' range.<ref name=flora/>

The plant's native distribution includes much of East Asia and Southeast Asia. Country by country, it is found in China, Taiwan, Japan, Korea, the Russian Far East, Cambodia, Laos, Malaysia, Thailand, India and Vietnam. Within China it is found in all provinces except Qinghai, Hainan, Xinjiang, and Tibet.<ref name=chinaflora>Template:Citation</ref> In Japan the plant is found throughout the bulk of the country from Hokkaido south to Kyūshū. In Russia the Asiatic dayflower is found naturally on Sakhalin as well as in the Far East in areas surrounding the Ussuri River.<ref name=ohwi>Template:Citation</ref>

The species has been introduced to much of Europe and eastern North America. On the former continent it is now found from Central Europe well into western Russia.<ref name=taiwan>Template:Citation</ref> Specifically it is known from Italy north to Switzerland, east through the region encompassing the former Yugoslavia, east into the regions around the Black Sea including Romania, the Moldavia Region, and Ukraine but excluding Crimea, north through the Dnieper Basin into Belarus and Russia, continuing east into the regions surrounding the Don River and the Volga River south to their intersection at the Volga-Don Canal and north to the regions around Lake Ladoga and Lake Ilmen, and farther east to the regions of the Ural River and the Kama River. It is also found in the Czech Republic and Slovakia.<ref>Template:Citation</ref> It is present in the provinces of Ontario and Quebec in Canada, and in most of the eastern and central American states from Massachusetts and New York in the northeast, west to Minnesota and south through the Great Plains to Texas and east to extreme northern Florida in the United States.<ref name=flora>Template:Citation</ref>

Within its native distribution, the plant is most typical of moist, open places, including shady forest edges and wet areas of crop fields, orchards, ditches, and roadsides.<ref name=chinaflora/><ref name=taiwan/><ref>Template:Citation</ref> In Taiwan, it can be found from Template:Convert elevation.<ref name=taiwan/> In areas where the Asiatic dayflower is an introduced weed it is most common in waste places, but also along the edges of fields, woods, and marshes, and occasionally penetrating into woods.<ref name=flora/>

The Asiatic dayflower is considered an invasive weed in many areas where it has been introduced. In the United States, the Virginia Department of Conservation and Recreation, for example, categorises the species as "occasionally invasive" in its Invasive Plant Species of Virginia. This means that the plant will "not affect ecosystem processes, but may alter plant community composition by outcompeting one or more native plant species". The species is typically limited to disturbed sites, whence it spreads relatively slowly.<ref>Template:Citation</ref> Within its native range in China it is also sometimes considered a pest, especially in the northeast of the country where it has caused economically significant agricultural damage in orchards.<ref name=chinainvade>Template:Citation</ref>

The Asiatic dayflower has been used in pollination studies concerning the behaviour of plants in relation to their pollinators. One important experiment tested the hypotheses that floral guides (i.e. various patterns and colours on anthers and petals) simultaneously promote pollinator visitation and prevent visits where the pollinator fails to come into contact with the stigma or anthers, termed pollen theft. As the flowers of the Asiatic dayflower lack nectar, they offer only pollen as a reward to their visitors. To attract pollinators, the plant has three types of brightly colored floral organs: the large blue petals, fertile yellow anthers, and infertile yellow antherodes that lack pollen. When the infertile antherodes were experimentally removed in natural populations, the number of total floral visitor landings was reduced, supporting the hypothesis that these infertile anthers essentially trick their pollinators into believing they offer more than they actually do. When the central, bright yellow fertile anther was removed, leaving only two brown fertile anthers, the frequency of legitimate flower landings decreased, meaning that the visitors were not pollinating the flowers, suggesting that floral signals also prevent "theft", or visits where the pollinators take pollen, but do not place any on the stigma. Thus both the fertile anthers and the infertile antherodes were shown to play an important role in both increasing visitor landings and orienting floral visitors toward a landing point appropriate for pollination.<ref name=japan>Template:Citation</ref>

A male syrphid fly, Episyrphus balteatus, the most common pollinator of the Asiatic dayflower in much of its range

Recent studies have shown that wild Asiatic dayflower populations found growing on copper mine spoils in eastern China exhibited very high concentrations of copper within the plants, more so than the 48 species tested. Commelina communis had sequestered some 361 mg/kg of copper, while the plant with the next highest concentration, Polygonum macrathum, had 286 mg/kg. Five of the species examined, including the Asiatic dayflower, also showed high concentrations of other metals such as zinc, lead, and cadmium. The results suggest that the Asiatic dayflower is a good candidate for copper mine spoil revegetation and phytoremediation.<ref>Template:Citation</ref>

Ten species of fungi have been found on the Asiatic dayflower, four of which can infect the plant, while 12 species of insects are known to be associated with it. Two of the fungi, Kordyana commelinae and Phyllosticta commelinicola, are thought to be host specific with the Asiatic dayflower. Of the ten fungi seven are Basidiomycota and three are Ascomycota. Nine of the 12 insects associated with the plant are beetles, seven of which are in the genus Lema, while the other two are in the families Hispidae and Pentatomidae. The remaining three insects include one species of moth, Pergesa acteus, and two true bugs, namely Aphis commilinae and Aeschrocoris ceylonicus.<ref name=chinainvade/> Important pollinators include the Asian honeybee, Apis cerana, syrphid fly, Episyrphus balteatus, and the bumble bee species Bombus diversus.<ref name=japan/>

Ukiyo-e woodcut by Suzuki Harunobu; the blue pigment used on the kimono is believed to be aigami made from petals of the Asiatic dayflower; the alternative would be ai derived from Polygonum tinctorum
In China it is used as a medicinal herb with febrifugal, antipyretic, anti-inflammatory, and diuretic effects. Additionally, it is also used for treating sore throats and tonsillitis.<ref name=chinaflora/><ref name=mansfeld/> Recent pharmacological investigations have revealed that the Asiatic dayflower contains at least five active compounds. One of these, p-hydroxycinnamic acid, shows antibacterial activity, while another, D-mannitol, has an antitussive effect.<ref>Template:Citation</ref> In China and India the plant is also used as a vegetable and fodder crop.<ref name=mansfeld/>

Commelinin is the blue pigment from the flowers of C. communis, is a metalloanthocyanin. It is a complex of 4 Mg2+ ions chelating six anthocyanin molecules.<ref>Template:Cite journal</ref>