Cornus florida, the flowering dogwood, is a species of flowering plant in the family Cornaceae native to eastern North America and northern Mexico. An endemic population once spanned from southernmost coastal Maine south to northern Florida and west to the Mississippi River.<ref>Template:Cite web</ref> The tree is commonly planted as an ornamental in residential and public areas because of its showy bracts and interesting bark structure.

The flowering dogwood is usually included in the dogwood genus Cornus as Cornus florida L., although it is sometimes treated in a separate genus as Benthamidia florida (L.) Spach. 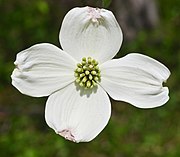 When in the wild they can typically be found at the forest edge and frequently on dry ridges. While most of the wild trees have white bracts, some selected cultivars of this tree also have pink bracts, some even almost a true red. They typically flower in early April in the southern part of their range, to late April or early May in northern and high altitude areas. The similar Kousa dogwood (Cornus kousa), native to Asia, flowers about a month later.

The fruit is a cluster of two to ten separate drupes, (fused in Cornus kousa), each Template:Convert long and about Template:Convert wide, which ripen in the late summer and the early fall to a bright red, or occasionally yellow with a rosy blush. They are an important food source for dozens of species of birds, which then distribute the seeds. 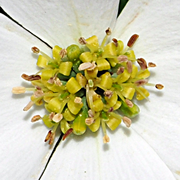 Close up of a flower cluster showing the four pale green petals on each flower.

Flowering dogwood does best horticulturally in moist, acidic soil in a site with some afternoon shade, but good morning sun. It does not do well when exposed to intense heat sources such as adjacent parking lots or air conditioning compressors. It also has a low salinity tolerance. The hardiness zone is 5–9 and the preferred pH is between 6.0–7.0.<ref name=w/> In urban and suburban settings, care should be taken not to inflict mower damage on the trunk or roots, as this increases the tree's susceptibility to disease and pest pressure.<ref name=w>Cappiello, P and D Shadow. 2005. Dogwoods: The Genus Cornus. Timber Press, Portland. pp 98-100.</ref> The common flowering dogwood has been placed on the endangered species list in Ontario.<ref>https://www.ontario.ca/page/eastern-flowering-dogwood</ref><ref>Template:Cite web</ref><ref>https://plants.usda.gov/plantguide/pdf/pg_cofl2.pdf</ref> In regions where dogwood anthracnose is a problem, homeowners and public land managers are encouraged to know the symptoms and inspect trees frequently. The selection of healthy, disease-free planting stock is essential and transplanting trees from the forest should be avoided. Sites should be selected for reasonably well-drained, fertile soils; full sun is recommended in high-hazard areas (such as stream or pond banks). New plantings should be mulched to a depth of Template:Convert, avoiding the stem. Dead wood and leaves should be pruned and completely removed and destroyed yearly. Plants should be watered weekly during droughts, with watering done in the morning, avoiding wetting the foliage. Registered fungicides can be applied when necessary, according to manufacturers instructions and advice of local Extension Service.<ref>Anderson, RL, JL Knighten, M Windham, K Langdon, F Hendrix, R Roncadori. 1994. Dogwood anthracnose and its spread in the South. Project Report R8-PR 26. USDA Forest Service, Atlanta, GA. 10pp.</ref>

Flowering dogwood is grown widely throughout the temperate world.

Cornus florida is easily propagated by seeds, which are sown in the fall into prepared rows of sawdust or sand, and emerge in the spring. Germination rates for good clean seed should be near 100% if seed dormancy is first overcome by cold stratification treatments for 90 to 120 days at Template:Convert.<ref>Cappiello, P and D Shadow. 2005. Dogwoods: The Genus Cornus. Timber Press, Portland. pp 100-102.</ref><ref name="Hartmann, HT 2002. pp. 769">Hartmann, HT, DE Kester, FT Davies, RL Geneve. 2002. Hartmann and Kester's Plant Propagation: Principles and Practices, 7th Edition. Prentice Hall, Upper Saddle River, NJ. pp. 769.</ref> Flowering dogwood demonstrates gametophytic self-incompatibility, meaning that the plants can't self-fertilize. This is important for breeding programs as it means that it is not necessary to emasculate (remove the anthers from) C. florida flowers before making controlled cross-pollinations. These pollinations should be repeated every other day, as the flowers must be cross-pollinated within one or two days of opening for pollinations to be effective.<ref>Reed, SM. 2004. Self-incompatibility in Cornus florida. HortScience 39(2): 335-338.</ref>

Tree in the wild in autumn.

Softwood cuttings taken in late spring or early summer from new growth can be rooted under mist if treated with 8,000 to 10,000 ppm indole-3-butyric acid (IBA). In cold climates, potted cuttings must be kept in heated cold frames or polyhouses the following winter to maintain temperatures between Template:Convert. Although rooting success can be as high as 50–85%, this technique is not commonly used by commercial growers. Rather, selected cultivars are generally propagated by T-budding in late summer or by whip grafting in the greenhouse in winter onto seedling rootstock.<ref name="Hartmann, HT 2002. pp. 769"/><ref>Cappiello, P and D Shadow. 2005. Dogwoods: The Genus Cornus. Timber Press, Portland. pp 102.</ref>

Other old names now rarely used include American dogwood, Florida dogwood, Indian arrowwood, Cornelian tree, white cornel, white dogwood, false box, and false boxwood. This species has in the past been used in the production of inks, scarlet dyes, and as a quinine substitute. The hard, dense wood has been used for products such as golf club heads, mallets, wooden rake teeth, tool handles, jeweler's boxes and butcher's blocks.<ref>Petrides, George A. 1972. A field guide to trees and shrubs; field marks of all trees, shrubs, and woody vines that grow wild in the northeastern and north-central United States and in southeastern and south-central Canada. The Peterson field guide series, 11. Boston: Houghton Mifflin. page 106.</ref><ref>Cappiello, P and D Shadow. 2005. Dogwoods: The Genus Cornus. Timber Press, Portland. pp 100.</ref> Cornus florida is the state tree and flower of Virginia,<ref>Template:Cite web</ref> the state tree of Missouri, and state flower of North Carolina.<ref>Template:Cite web</ref><ref name=nc>Template:Cite web</ref> It was used to treat dogs with mange, which may be how it got its name.<ref name=nc/> The red berries are edible, but do not taste good.<ref>Template:Cite web</ref>

In 1915, forty dogwood saplings were donated by U.S. to Japan in the 1912-15 exchange of flowers between Tokyo and Washington, D.C. While the cherry trees survived the ensuing sour relations of these two countries and are the main feature of the National Cherry Blossom Festival, all dogwood trees in Tokyo died except the one that had been planted in an agriculture high school. In 2012, the United States sent 3,000 dogwood saplings to Japan to commemorate the 100 year anniversary of the Washington D.C. cherry trees given as a gift to the U.S. by Japan in 1912.<ref>Template:Cite web</ref>