Crepis tectorum, the narrowleaf hawksbeard<ref>Template:PLANTS</ref> or narrow-leaved hawk's-beard,<ref name=BSBI07>Template:Cite web</ref> is an annual or winter annual plant that grows to Template:Convert high.<ref name="Nadja">Template:Cite journal</ref> It is an invasive species and during maturity it has one main stem, which is branched, hairless, and leafy. The leaves are arranged in an alternate manner and are less than Template:Convert wide. The Greek word krepis means sandal or slipper which resembles the shape of the seed.<ref>Template:Cite web</ref> Narrowleaf hawksbeard originated in Siberia and was introduced to Canada around 1890.<ref name="Nadja"/>

The species is now naturalized in much of Canada, Greenland, and northern parts of the United States including Alaska.<ref>Biota of North America Program 2014 county distribution map</ref> Narrowleaf hawksbeard is now commonly found in the parkland zone of Alberta, Saskatchewan and Manitoba.<ref name="Nadja"/> Crepis tectorum is found in waste areas, conventional tillage, reduced tillage, forage and hay fields, and roadsides.<ref>Template:Cite book</ref><ref name="Bubar">Template:Cite web</ref>

Crepis tectorum may look similar to a dandelion at this stage but will have teeth that point downward on the underside leaf margin.<ref name="Bubar"/> The cotyledons are oval and the first true leaves are more elongated with petioles.

A mature Crepis tectorum plant will have dandelion-like flowers, with many flower heads on each stem.<ref name="Bubar"/> When the plant had gone to seed it will have a white, fluffy head where the flower used to be.<ref name="Bubar"/> The seeds are dark purple/brown achenes dispersed by the wind using hairs called the pappus.<ref name="Nadja"/> 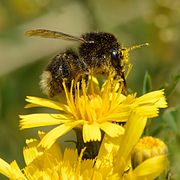 Crepis tectorum is an annual weed that grows in cultivated fields and roadsides. It is very invasive so it can take over a field and lead to serious ecological impacts for the surrounding. Crepis tectorum is able to grow in calcareous soil as well as soil that does not contain lime.<ref name="Nadja"/> However, it grows best in nutrient rich soils containing clays and loams.<ref name="Nadja"/> It also thrives in dry, coarse soil. It grows with other species in the wild however, it becomes infectious if not controlled by humans. It can easily be removed by hand, although it can be controlled better by chemical means. The presence of the Narrowleaf hawksbeard is damaging to the soil and other species of plants nearby as it generally takes over the area. The temperature range for germination is Template:Convert, with an optimum depth of Template:Convert.<ref>Template:Cite web</ref> Narrow-leaved hawksbeard grows on both calcareous and lime-deficient soils.

Inflorescences of Crepis tectorum are approximately ½-¾ inches wide and are hermaphrodite, having both male and female organs. It produces small flowers from June until September. The fruit is cylindrical shaped and dark brown. The fruit of Crepis tectorum is dry and is called an achene.<ref name="Nadja"/>