Cypripedium calceolus is a lady's-slipper orchid, and the type species of the genus Cypripedium. It is native to Europe and Asia.

This is the largest orchid species in Europe, growing to 60 cm tall<ref name=powo>Kew Science - Cypripedium calceolus</ref> with flowers as wide as 9 cm.<ref>Nature Gate - Ladys Slipper</ref> Before it flowers, it is distinguished from other orchids by the large size and width of its ovate leaves (as big as 18 cm long, 9 cm wide),<ref name=powo/> which like other orchids exhibit parallel venation. Each shoot has up to four leaves and a small number (1-2) of flowers, which have long often twisted petals varying from red-brown to black (rarely green) and a slipper-shaped yellow labellum, within which red dots are visible.<ref name=powo/> It is a long-lived perennial<ref name=powo/> and spreads using horizontal stems (rhizomes).<ref name=powo/>

Cypripedium calceolus can be confused, when not flowering, with Allium ursinum, Convallaria majalis or several species of Epipactis orchid. It closely resembles other species of Cypripedium orchid native to the United States (see taxonomy, below).

It is typically found in open woodland on moist calcareous soils. In continental Europe it is also found growing in the decomposed humus of semi-shaded woodland cover on limestone. It has declined over much of the European part of its range, and as a result is legally protected in a number of countries. Its upper elevation limit is 2100m.<ref name="iucnredlist.org">IUCN Red List - Cypripedium calceolus</ref> According to growing instructions provided by Phytesia, it cannot survive waterlogging or direct midday sun.

It is pollinated by a number of different insect species, including at least seven species of miner bee in the genera Andrena and Colletes, as well as at least two species of Lasioglossum (furrow bees).<ref name="pro-natura.net"/> Plants are very vulnerable to herbivory by slugs and snails.

Although the global conservation status of Cypripedium calceolus is least concern according the IUCN Red List,<ref name="iucnredlist.org"/> in many countries (including the UK and Denmark) it has become rare and is afforded legal protection. C. calceolus is common in Poland and Austria but in Greece it has become extinct.<ref name=powo/>

In Britain, it was formerly a reasonably widespread plant across northern England, particularly the limestone area of the Yorkshire Dales.<ref>Endangered Plants, Jan Čeřovský (1995) Template:ISBN</ref> By the late 20th century it had declined to just a single plant in one location in the dales.<ref>Pardosa lugubris (Walckenaer, 1802) at Grass Wood, North Yorkshire. Spider Recording Scheme News No. 56</ref> While the virtual extinction of the lady's-slipper orchid from its historical range in Britain is often blamed on uprooting by gardeners and botanists, it is also the case that its preferred habitat shrank markedly with human clearance of woodland from the limestone landscape, and the grazing of sheep will have finished it off.<ref>Britain’s Rare Flowers, Peter Marren (1999) Template:ISBN</ref> It became a protected species in the UK in 1975 under the Conservation of Wild Creatures and Wild Plants Act,<ref>http://www.caithness.org/caithnessfieldclub/bulletins/1975/october/conservation.htm</ref> but a reintroduction programme for the lady's-slipper orchid is in place,<ref>Lady’s-Slipper Orchid Cypripedium calceolus Species Action Plan Yorkshire Dales National Park Authority Template:Webarchive</ref><ref>Re-Introduction Project - Lady's-Slipper, Conservation in action, Britain's Orchids, A guide to the identification and ecology of the wild orchids of Britain and Ireland, David Lang and Natural England</ref> and has led to a population of hundreds of plants as of 2003.<ref>Template:Cite web</ref>

A laboratory in Belgium has developed a technique to mass-produce C. calceolus, so plants are commercially available, unlike many orchid species.<ref>Phytesia</ref>

Cypripedium calceolus sensu stricto ("in the strict sense") does not occur in North America. The closely related Cypripedium parviflorum and C. pubescens are often still referred to as subspecies or varieties of C. calceolus.

The Norwegian municipality of Snåsa has a Cypripedium calceolus in its coat-of-arms.

In Pavel Ivanovich Melnikov's "In the Forests", a znakharka (Russian wise woman) calls this Adam's head, Adam's grass, and Cuckoo's slippers and says it is good for every ill including driving away evil spirits. 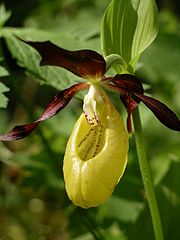