Drosera rotundifolia, the round-leaved sundew<ref name=BSBI07>Template:Cite web</ref> or common sundew, is a species of sundew, a carnivorous plant often found in bogs, marshes and fens. One of the most widespread sundew species, it has a circumboreal distribution, being found in all of northern Europe, much of Siberia, large parts of northern North America, Korea and Japan but is also found as far south as California, Mississippi and Alabama in the United States of America and on New Guinea.

A Drosera rotundifolia leaf on a 0.1-inch grid

A typical plant has a diameter of around Template:Convert, with a Template:Convert tall inflorescence. The flowers grow on one side of a single slender, hairless stalk that emanates from the centre of the leaf rosette. White or pink in colour, the five-petalled flowers produce Template:Convert, light brown, slender, tapered seeds.<ref name="jepson1993">Template:Cite book</ref>

In the winter, D. rotundifolia produces a hibernaculum to survive the cold conditions. This consists of a bud of tightly curled leaves at ground level. 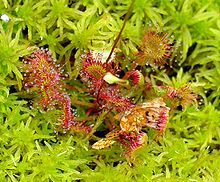 D. rotundifolia with the remains of a butterfly

The plant feeds on insects, which are attracted to the glistening drops of mucilage, loaded with a sugary substance, covering its leaves. It has evolved this carnivorous behaviour in response to its habitat, which is usually poor in nutrients or is so acidic that nutrient availability is severely decreased. The plant uses enzymes to dissolve the insects – which become stuck to the glandular tentacles – and extract ammonia (from proteins) and other nutrients from their bodies.<ref>Template:Cite web</ref> The ammonia replaces the nitrogen that other plants absorb from the soil, and plants that are placed in a high-nitrogen environment rely less upon nitrogen from captured insects.<ref>Template:Cite journal</ref>

It has been assumed that insects were also attracted to the bright red color of the common sundew, but studies using artificial traps have suggested that color does not affect prey attraction.<ref>Template:Cite journal</ref>

In North America, the common sundew is found in all parts of Canada except the Canadian Prairies and the tundra regions, southern Alaska, the Pacific Northwest, and along the Appalachian Mountains south to Georgia and Louisiana.

It is found in much of Europe, including the British Isles, most of France, the Benelux nations, Germany, Denmark, Switzerland, Czech Republic, Poland, Belarus, the Baltic countries, Sweden and Finland, as well as northern portions of Portugal, Spain, Romania, mountain regions of Bulgaria and in Iceland and southern regions of Norway and Greenland. It is infrequent in Austria and Hungary, and some populations are scattered around the Balkans.

In Britain, this is the most common form of sundew and it can be found on Exmoor, Dartmoor, Sedgemoor, the Lake District, Shropshire, Pennines and in Scotland, among other places. It is usually found in bogs, marshes and in hollows or corries on the sides of mountains. It is the county flower of Shropshire.<ref>Template:Cite web</ref>

In Asia, it is found across Siberia and Japan, as well as parts of Turkey, the Caucasus region, the Kamchatka Peninsula and southern parts of Korea. Populations can also be found on the island of New Guinea and Italy. 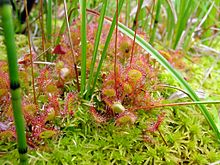 D. rotundifolia growing in sphagnum moss along with sedges and Equisetum

The common sundew thrives in wetlands such as marshes and fens.<ref>C.Michael Hogan. 2011. Drosera rotundifolia. Encyclopedia of Earth. Eds. M.McGinley & C.J.Cleveland. National Council for Science and the Environment. Washington DC</ref> It is also found in wet stands of black spruce, Sphagnum bogs, silty and boggy shorelines and wet sands. It prefers open, sunny or partly sunny habitats.

The round-leaved sundew is classified as Least Concern in the IUCN red list. In North America, it is considered endangered in the US states of Illinois and Iowa, exploitably vulnerable in New York, and threatened in Tennessee. [1]

D. rotundifolia is one of the temperate species of Drosera cultivated by growers interested in carnivorous plants. To be grown successfully, plants of the wild species must be given a substantial period of winter dormancy during which they form hibernacula. The cultivar D. rotundifolia 'Charles Darwin' can be grown more successfully without a period of dormancy.<ref name=ICPS>Template:Cite web</ref>

According to D.H. Paper, et al.,<ref>Template:Cite journal</ref> Drosera rotundifolia plant extracts show great efficacy as an anti-inflammatory and antispasmodic, more so than D. madagascariensis, as a result of the flavonoids such as hyperoside, quercetin and isoquercetin, but not the naphthoquinones present in the extracts. The flavonoids are thought<ref>Template:Cite journal</ref> to affect the M3 muscarinic receptors in smooth muscle, causing the antispasmodic effects. Ellagic acid in D. rotundifolia extracts has also been shown to have antiangiogenic effects.