Translucent dots of glandular tissue on the leaves

Perforate St John's wort is a herbaceous perennial plant with extensive, creeping rhizomes. Its reddish stems are erect and branched in the upper section, and can grow up to Template:Convert high. The stems are woody near their base and may appear jointed from leaf scars.<ref name=NorthField>Template:Cite book</ref> The branches are typically clustered about a depressed base. It has opposite and stalkless leaves that are narrow and oblong in shape and Template:Convert long.<ref name="Rose">Template:Cite book</ref> Leaves borne on the branches subtend the shortened branchlets. The leaves are yellow-green in color, with scattered translucent dots of glandular tissue.<ref>Template:Cite journal</ref> The dots are conspicuous when held up to the light, giving the leaves the "perforated" appearance to which the plant's Latin name refers. The flowers measure up to Template:Convert across, have five petals and sepals, and are colored bright yellow with conspicuous black dots.<ref name=Stace>Template:Cite book</ref> The flowers appear in broad helicoid cymes at the ends of the upper branches, between late spring and early to mid summer. The cymes are leafy and bear many flowers. The pointed sepals have black glandular dots. The many stamens are united at the base into three bundles. The pollen grains are ellipsoidal.<ref name="Mehta" /> The black and lustrous seeds are rough, netted with coarse grooves.<ref name=Manual>Template:Cite book</ref>

When flower buds (not the flowers themselves) or seed pods are crushed, a reddish/purple liquid is produced.<ref name="ProjectNoah">Template:Cite web</ref>

The specific epithet perforatum is Latin, referring to the perforated appearance of the plant's leaves.<ref name=Manual/>

The common name "St John's wort" comes from its traditional flowering and harvesting on St John's Day, 24 June. The genus name Hypericum is possibly derived from the Greek words hyper (above) and eikon (picture), in reference to the tradition of hanging plants over religious icons in the home during St John's Day, to ward off evil.

Hypericum perforatum is native to temperate parts of Europe and Asia, but has spread to temperate regions worldwide as a cosmopolitan invasive weed.<ref name=cabi/><ref>Template:Cite web</ref> It was introduced to North America from Europe.<ref>Template:Cite book</ref> The flower occurs in prairies, pastures, and disturbed fields. It prefers sandy soils.<ref name=NorthField/>

Template:Refimprove section St John's wort reproduces both vegetatively and sexually. It thrives in areas with either a winter- or summer-dominant rainfall pattern; however, distribution is restricted by temperatures too low for seed germination or seedling survival.<ref name=cabi/> Altitudes greater than 1500 m, rainfall less than 500 mm, and a daily mean temperature greater than 24 °C are considered limiting thresholds. Depending on environmental and climatic conditions, and rosette age, St John's wort will alter growth form and habit to promote survival. Summer rains are particularly effective in allowing the plant to grow vegetatively, following defoliation by insects or grazing.<ref>Ramawat, Kishan Gopal. Bioactive Molecules and Medicinal Plants. Springer Science & Business Media, 2008. p. 152. Template:ISBN</ref> The seeds can persist for decades in the soil seed bank, germinating following disturbance.<ref name="feis" />

Although Hypericum perforatum is grown commercially in some regions of south east Europe, it is listed as a noxious weed in more than twenty countries and has introduced populations in South and North America, India, New Zealand, Australia, and South Africa.<ref name=cabi/><ref name="feis">Template:Cite web</ref> In pastures, St John's wort acts as both a toxic and invasive weed. It replaces native plant communities and forage vegetation to the extent of making productive land nonviable<ref name="autogenerated1">Template:Cite web|Hypericum perforatum</ref> or becoming an invasive species in natural habitats and ecosystems. Ingestion by livestock such as horses, sheep, and cattle can cause photosensitization, central nervous system depression, spontaneous abortion or death.<ref name="autogenerated1" /><ref name="WattPP">Watt, John Mitchell; Breyer-Brandwijk, Maria Gerdina: The Medicinal and Poisonous Plants of Southern and Eastern Africa 2nd ed Pub. E & S Livingstone 1962</ref> Effective herbicides for control of Hypericum include 2,4-D, picloram, and glyphosate. In western North America three beetles Chrysolina quadrigemina, Chrysolina hyperici and Agrilus hyperici have been introduced as biocontrol agents.<ref name="Harper2010">Template:Cite book</ref> Template:Clear

Common St. John's wort has long been used in herbalism and folk medicine.<ref name="nccih">Template:Cite web</ref> It was thought to have medical properties in classical antiquity and was a standard component of theriacs, from the Mithridate of Aulus Cornelius Celsus' De Medicina (ca. 30 CE) to the Venice treacle of d'Amsterdammer Apotheek in 1686. Folk usages included oily extract ("St. John's oil") and Hypericum snaps. Hypericum perforatum is a common species and is grown commercially for use in herbalism and traditional medicine.<ref>USDA.gov Retrieved November 23, 2015</ref>

The red, oily extract of H. perforatum has been used in the treatment of wounds for millennia, including by the Knights Hospitaller, the Order of St John, after battles in the Crusades, which is most likely where the name came from.<ref>Knights Hospitaller</ref>Template:Better source<ref name=nccih/><ref>Template:Cite journal</ref> Both hypericin and hyperforin are under study for their potential antibiotic properties.<ref name="pmid10382704">Template:Cite journal</ref>

Some studies have supported the efficacy of St John's wort as a treatment for depression in humans, but have not concluded it as a replacement for more studied treatments, and proper medical consultation.<ref name=nccih/> A 2015 meta-analysis review concluded that it has superior efficacy to placebo in treating depression, is as effective as standard antidepressant pharmaceuticals for treating depression, and has fewer adverse effects than other antidepressants.<ref name="SJW and rMAO-A inhibitors - 2015">Template:Cite journal</ref> The authors concluded that it is difficult to assign a place for St. John's wort in the treatment of depression owing to limitations in the available evidence base, including large variations in efficacy seen in trials performed in German-speaking relative to other countries. In Germany, St. John's wort may be prescribed for mild to moderate depression, especially in children and adolescents.<ref>Template:Cite journal</ref> A 2008 Cochrane review of 29 clinical trials concluded that it was superior to placebo in patients with major depression, as effective as standard antidepressants and had fewer side-effects.<ref name="pmid18843608">Template:Cite journal</ref>

In the United States, St John's wort is considered a dietary supplement by the FDA, and is not regulated by the same standards as a prescription drug.<ref>Template:Cite web</ref><ref>Template:Cite news</ref> According to the United States National Center for Complementary and Integrative Health, "St. John’s wort isn’t consistently effective for depression."<ref name=nccih/> Supplement strength varies by manufacturer and possibly by batch.<ref>Template:Cite web</ref> A 2016 review noted that use of St. John's wort for mild and moderate depression was better than placebo for improving depression symptoms, and comparable to antidepressant medication.<ref name="pmid27589952">Template:Cite journal</ref> In September 2016, ConsumerLab.com tested ten brands of St John's Wort supplements for levels of hypericin or hyperforin, and the presence of heavy metals, finding considerable variability in composition, with some products not containing any hypericin or hyperforin.<ref>Template:Cite web</ref>

The organ systems associated with adverse drug reactions to St John's wort and fluoxetine (an SSRI) have a similar incidence profile;<ref name="Organ system" /> most of these reactions involve the central nervous system.<ref name="Organ system">Template:Cite journal</ref> St John's wort also decreases the levels of estrogens, such as estradiol, by accelerating its metabolism, and should not be taken by women on contraceptive pills.<ref name=nccih/> St John's wort may cause photosensitivity. This can lead to visual sensitivity to visible and ultraviolet light and to sunburns in situations that would not normally cause them.<ref name="ernst_et_al_1998" />

St. John's wort can interfere with the effects of many prescription medicines, including birth control pills, cyclosporine, digoxin, HIV drugs, cancer medications including irinotecan, and warfarin.<ref name=nccih/> Combining both St John's wort and antidepressants could lead to increased serotonin levels causing serotonin syndrome.<ref>Template:Cite journal</ref> It should not be taken with the heart medication, ranolazine.<ref>Template:Cite web</ref> Combining estrogen containing oral contraceptives with St John's wort can lead to decreased efficacy of the contraceptive and eventually unplanned pregnancies.<ref>Template:Cite journal</ref> Consumption of St. John's wort is discouraged for those with bipolar disorder. There is concern that people with bipolar depression taking St. John's wort may be at a higher risk for mania.<ref name="ummdotedu">Template:Cite web</ref>

St John's wort has been shown to cause multiple drug interactions through induction of the cytochrome P450 enzymes CYP3A4 and CYP1A2. This drug-metabolizing enzyme induction results in the increased metabolism of certain drugs, leading to decreased plasma concentration and potential clinical effect.<ref>Template:Cite journal</ref> The principal constituents thought to be responsible are hyperforin and amentoflavone. There is strong evidence that the mechanism of action of these interactions is activation of the pregnane X receptor.<ref name="pmid19075619">Template:Cite journal</ref>

St John's wort has also been shown to cause drug interactions through the induction of the P-glycoprotein efflux transporter. Increased P-glycoprotein expression results in decreased absorption and increased clearance of certain drugs, leading to lower plasma concentrations and impaired clinical efficacy.<ref>Template:Cite journal</ref>

For a complete list, see CYP3A4 ligands and CYP2C9 ligands.

In vitro research and phytochemicals

In large doses, St John's wort is poisonous to grazing livestock (cattle, sheep, goats, horses).<ref name="autogenerated1" /> Behavioural signs of poisoning are general restlessness and skin irritation. Restlessness is often indicated by pawing of the ground, headshaking, head rubbing, and occasional hindlimb weakness with knuckling over, panting, confusion, and depression. Mania and hyperactivity may also result, including running in circles until exhausted. Observations of thick wort infestations by Australian graziers include the appearance of circular patches giving hillsides a 'crop circle' appearance, it is presumed, from this phenomenon. Animals typically seek shade and have reduced appetite. Hypersensitivity to water has been noted, and convulsions may occur following a knock to the head. Although general aversion to water is noted, some may seek water for relief.

Severe skin irritation is physically apparent, with reddening of non-pigmented and unprotected areas. This subsequently leads to itch and rubbing, followed by further inflammation, exudation, and scab formation. Lesions and inflammation that occur are said to resemble the conditions seen in foot and mouth disease. Sheep have been observed to have face swelling, dermatitis, and wool falling off due to rubbing. Lactating animals may cease or have reduced milk production; pregnant animals may abort. Lesions on udders are often apparent. Horses may show signs of anorexia, depression (with a comatose state), dilated pupils, and injected conjunctiva.

Increased respiration and heart rate is typically observed while one of the early signs of St John's wort poisoning is an abnormal increase in body temperature. Affected animals will lose weight, or fail to gain weight; young animals are more affected than old animals. In severe cases death may occur, as a direct result of starvation, or because of secondary disease or septicaemia of lesions. Some affected animals may accidentally drown. Poor performance of suckling lambs (pigmented and non-pigmented) has been noted, suggesting a reduction in the milk production, or the transmission of a toxin in the milk.

Araya and Ford (1981) explored changes in liver function and concluded there was no evidence of Hypericum-related effect on the excretory capacity of the liver, or any interference was minimal and temporary. However, evidence of liver damage in blood plasma has been found at high and long rates of dosage.

Photosensitisation causes skin inflammation by a mechanism involving a pigment or photodynamic compound, which when activated by a certain wavelength of light leads to oxidation reactions in vivo. This leads to tissue lesions, particularly noticeable on and around parts of skin exposed to light. Lightly covered or poorly pigmented areas are most conspicuous. Removal of affected animals from sunlight results in reduced symptoms of poisoning.

Hypericin, pseudohypericin, and hyperforin may be quantitated in plasma as confirmation of usage and to estimate the dosage. These three active substituents have plasma elimination half-lives within a range of 15–60 hours in humans. None of the three has been detected in urine specimens.<ref>R. Baselt, Disposition of Toxic Drugs and Chemicals in Man, 8th edition, Biomedical Publications, Foster City, CA, 2008, pp. 1445–1446.</ref> 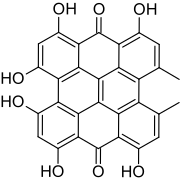