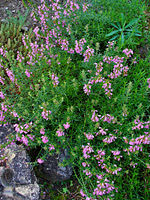 Hyssopus officinalis or hyssop is a herbaceous plant of the genus Hyssopus native to Southern Europe, the Middle East, and the region surrounding the Caspian Sea. Due to its properties as an antiseptic, cough reliever, and expectorant, it is commonly used as a medicinal plant.

During the summer, the plant produces bunches of pink, blue, or, more rarely, white fragrant flowers. These give rise to small oblong achenes.

Template:Main A plant called hyssop has been in use since classical antiquity. Its name is a direct adaptation from the Greek ὕσσωπος (hyssopos). The Hebrew word אזוב (ezov, esov, or esob) and the Greek word ὕσσωπος probably share a common (but unknown) origin.<ref>Oxford English Dictionary, 2nd Edition, 1989, s.v. hyssop</ref> The name hyssop appears as a translation of ezov in some translations of the Bible, notably in verse 7 of Psalm 51: "Thou shalt purge me with hyssop, and I shall be clean" (King James Bible), but researchers have suggested that the Biblical accounts refer not to the plant currently known as hyssop but rather to one of a number of different herbs, including Origanum syriacum (Syrian oregano, commonly referred to as "bible hyssop").<ref>Based on the Judeo-Arabic translation of the word in the works of Rabbi Saadia Gaon (in his Tafsir, a translation of the Pentateuch, Exo. 12:22), David ben Abraham al-Fasi (in his Hebrew-Arabic Dictionary of the Bible, known as `Kitāb Jāmiʿ al-Alfāẓ`, vol. 1, s.v. אזוב), Rabbi Jonah ibn Janah (Sefer HaShorashim - Book of the Roots, s.v. אזב - aleph, zayn, bet), Maimonides (in his Mishnah Commentary, Nega'im 14:6) and Nathan ben Abraham I in Mishnah Uktzin 2:2. The problems with identification arise from Jewish oral tradition where it expressly prohibits Greek hyssop, and where the biblical plant is said to have been identical to the Arabic word, zaatar (Origanum syriacum), and which word is not to be associated with other ezobs that often bear an additional epithet, such as zaatar farsi = Persian-hyssop (Thymbra capitata) and zaatar rumi = Roman-hyssop (Satureja thymbra). See: The Mishnah (ed. Herbert Danby), Oxford University Press: Oxford 1977, s.v. Negai'im 14:6 (p. 696); Parah 11:7 (p. 711).</ref><ref>Template:Cite journal</ref><ref>Template:Cite journal</ref><ref>Template:Cite web</ref> I Kings iv. 33 mentions that 'ezov' was a small plant. It was burned with the Red Heifer (Num. xix. 6) and used for purification of lepers (Lev. xiv. 4, 6, 49, 51; comp. Num. xix. 18; Ps. li. 9), and at Passover it was used to sprinkle the blood of the sacrificial lamb on the doorposts (Ex. xii. 22).<ref>Template:Cite web</ref> A sponge attached to a hyssop branch was used to give Jesus on the cross a drink of vinegar. <ref>Jn 19:29</ref>

Hyssop was also used for purgation (religious purification) in Egypt, where, according to Chaeremon the Stoic, the priests used to eat it with bread in order to purify this type of food and make it suitable for their austere diet.<ref>From Chaeremon's History of Egypt, as quoted by Porphyry, De Abstinentia IV.6.9.</ref>

The species as a whole is resistant to drought, and tolerant of chalky, sandy soils. It thrives in full sun and warm climates.

Under optimal weather conditions, herb hyssop is harvested twice yearly, once at the end of spring and once more at the beginning of the fall. The plants are preferably harvested when flowering in order to collect the flowering tips.

Once the stalks are cut, they are collected and dried either stacked on pallets to allow for draining or hung to dry. The actual drying process takes place in a cool, dry, well-ventilated area, where the materials are mixed several times to ensure even drying. Drying herbs are kept from exposure to the sun to prevent discoloration and oxidation. The drying process takes approximately six days in its entirety. Once dried, the leaves are removed and both components, leaves and flowers, are chopped finely. The final dried product weighs a third of the initial fresh weight and can be stored for up to 18 months. 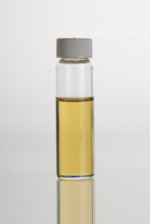 The essential oil includes the chemicals thujone and phenol, which give it antiseptic properties.<ref>Template:Cite book, p 177.</ref> Its high concentrations of thujone and chemicals that stimulate the central nervous system, including pinocamphone and cineole, can provoke epileptic reactions.<ref>Template:Cite journal</ref> The oil of hyssop can cause seizures and even low doses (2–3 drops) can cause convulsions in children.<ref>Hyssop, WebMD</ref>

The fresh herb is commonly used in cooking. Za'atar is a famous Middle Eastern herbal mix which has dried Hyssop leaves as one of the main ingredients (sumac being the other). Essence of hyssop can be obtained by steaming, and is used in cooking to a lesser extent.

The plant is commonly used by beekeepers to produce a rich and aromatic honey.

Herb hyssop leaves are used as an aromatic condiment. The leaves have a lightly bitter taste due to its tannins, and an intense minty aroma. Due to its intensity, it is used moderately in cooking. The herb is also used to flavor liqueur, and is part of the official formulation of Chartreuse.