Chamomile blue refers to chamazulene, the purified, deep-blue essential oil derived using steam distillation, rather than the plant itself.

M. chamomilla has a branched, erect and smooth stem, which grows to a height of Template:Convert. The long and narrow leaves are bipinnate or tripinnate.

The flowers are borne in paniculate flower heads (capitula). The white ray florets are furnished with a ligule, while the disc florets are yellow. The hollow receptacle is swollen and lacks scales. This property distinguishes German chamomile from corn chamomile (Anthemis arvensis), which has a receptacle with scales. The flowers bloom in early to midsummer, and have a strong, aromatic smell.

Template:Unreferenced section M. chamomilla can be found near populated areas all over Europe and temperate Asia, and it has been widely introduced in temperate North America, South America and Australia. It is widely distributed in low lying areas of Indian-occupied Kashmir. It often grows near roads, around landfills, and in cultivated fields as a weed, because the seeds require open soil to survive. 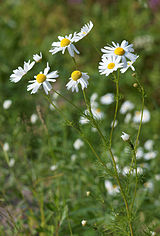 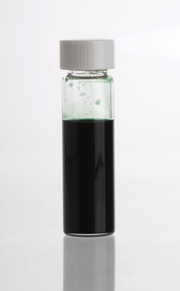 German chamomile is used in herbal medicine for a sore stomach, irritable bowel syndrome, and as a gentle sleep aid.<ref>Template:Cite web</ref> It is also used as a mild laxative and is anti-inflammatory<ref>Template:Cite journal</ref> and bactericidal.<ref>Template:Cite journal</ref> It can be taken as an herbal tea, two teaspoons of dried flower per cup of tea, which should be steeped for 10 to 15 minutes while covered to avoid evaporation of the volatile oils. The marc should be pressed because of the formation of a new active principle inside the cells, which can then be released by rupturing the cell walls, though this substance only forms very close to boiling point. For a sore stomach, some recommend taking a cup every morning without food for two to three months.<ref name="Chamomile">Template:Cite web</ref>

Dried chamomile has a reputation (among herbalists) for being incorrectly prepared because it is dried at a temperature above the boiling point of the volatile components of the plant. Template:Citation needed

A 2006 review of the medical literature reported a number of beneficial effects for chamomile in in vitro and animal tests, but added more human clinical trials are needed before any firm conclusions can be drawn. Research with animals suggests antispasmodic, anxiolytic, anti-inflammatory and some antimutagenic and cholesterol-lowering effects for chamomile.<ref>Template:Cite journal</ref>

Chamomile, a relative of ragweed, can cause allergy symptoms and can cross-react with ragweed pollen in individuals with ragweed allergies. It also contains coumarin, so care should be taken to avoid potential drug interactions, e.g. with blood thinners.

While extremely rare, very large doses of chamomile may cause nausea and vomiting. Even more rarely, rashes may occur.<ref>Readers' Digest Association</ref> Type-IV allergic reactions (i.e. contact dermatitis) are common and one case of severe Type-I reaction (i.e. anaphylaxis) has been reported in a 38-year-old man who drank chamomile tea.<ref>Template:Cite journal</ref>

Soil type: German chamomile will tolerate many soils, but prefers a sandy, well-drained soil with a pH of 7.0-7.5 and full sun.

Cultivation: In gardens, plants should be spaced Template:Convert apart. Chamomile does not require large amounts of fertilizer, but depending on soil tests, small amounts of nitrogen, phosphorus, and potassium should be applied before planting.<ref>Template:Cite web</ref>

The amounts of major nutrients that German chamomile needs for growing and reproduction are: