Ancient to modern use

A 13th-century image of a woman preparing a pennyroyal mixture using a mortar and pestle for a pregnant woman.

Documented use of pennyroyal dates back to ancient Greek, Roman, and Medieval cultures. Its name – although of uncertain etymology – is associated with Latin pulex (flea), alluding to the manner it was used to drive away fleas when smeared on the body.<ref name="Riddle">Template:Cite book</ref> Pennyroyal was commonly incorporated as a cooking herb by the Greeks and Romans. A large number of the recipes in the Roman cookbook of Apicius called for the use of pennyroyal, often along with such herbs as lovage, oregano and coriander. Although it was commonly used for cooking also in the Middle Ages, it gradually fell out of use as a culinary herb and is seldom used as such today.<ref>Template:Cite book</ref>

Records from Greek and Roman physicians and scholars contain information pertaining to pennyroyal's medicinal properties, as well as recipes used to prepared it. Pliny the Elder, in his encyclopedia Naturalis Historia (Natural History), described the plant as an emmenagogue, and that it also expelled a dead fetus.<ref name="Riddle2"/> Galen only listed pennyroyal as an emmenagogue, as did Oribasius. Roman and Greek writers Quintus Serenus Sammonicus and Aspasia however both agreed that pennyroyal, when served in tepid water, was an effective abortive method.<ref name="Riddle2"/> A medical text on gynecology attributed to Cleopatra (though it was never written by her but by a female Greek physician Metrodora) recommends the use of pennyroyal with wine to induce abortions.<ref name="Riddle2">Template:Cite book</ref>

In regard to its contraceptive properties, it was referred to in a joking manner in Aristophanes' play Peace (421 BCE). The god Hermes provides the male character Trygaios a female companion; when Trygaios asks if there would be a problem if she became pregnant, Hermes responds, "Not if you add a dose of pennyroyal."<ref name="Riddle"/> In a similar manner, in Aristophanes' comedy Lysistrata, after a pregnant female character on stage is told to withhold her body sexually from her husband, a slender female character, in comparison to the pregnant woman, is described as "a very lovely land Well croppy, and trimmed and spruced with pennyroyal."<ref name="Riddle"/>

Early settlers in colonial Virginia used dried pennyroyal to eradicate pests. Pennyroyal was such a popular herb that the Royal Society published an article on its use against rattlesnakes in the first volume of its Philosophical Transactions in 1665.<ref>Template:Cite journal</ref> 17th century apothecary and physician Nicholas Culpeper mentioned pennyroyal in his medical text The English Physitian, published in 1652.<ref name="Culpeper"/> In addition to its abortive properties, Culpeper recommends its use for other gastrointestinal ailments, such as constipation, hemorrhoids, as well as itching and blemishes to the skin, even toothaches.<ref name="Culpeper">Template:Cite book</ref>

Pennyroyal continued to be used up through the 20th and 21st centuries. Its oil is still commercially available today, though little is known about the appropriate dosages for humans. Scientists therefore likely consider it unsafe for use, as it is potentially toxic.<ref>Template:Cite web</ref>

The following are reported cases in which pennyroyal toxicity resulted in death: 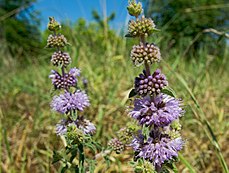 Pennyroyal is frequently used as an insecticide and pest repellant.<ref>Template:Cite web</ref> As a pest repellant, it is used to keep fleas away from household animals as well as on humans to ward off gnats and mosquitos. Some flea collars for pets have pennyroyal oil or the herb can be crushed in the lining. Humans have also put crushed pennyroyal stems in their pockets or on their clothing to ward off unwanted insects.<ref>Template:Cite web</ref> However, when using the pennyroyal plant as a pest repellant, the use of the concentrated pennyroyal oil should be avoided. Pennyroyal oil can be extremely toxic to both humans and animals, even in small quantities. With the use of pennyroyal around animals and humans comes the risk of it being absorbed through the skin and causing negative health effects. The less concentrated leaves of the plant should be used instead as an insect repellant.

Pennyroyal has historically also been used as a mint flavoring in herbal teas and foods. Pennyroyal tea has been used for cold relief, fevers, coughs, indigestion, liver and kidney problems and headaches.<ref>Template:Cite web</ref> The fresh or dried leaves of pennyroyal have also been used when treating influenza, abdominal cramps, to induce sweating, as well as in the treatment of diseases such as smallpox and tuberculosis.<ref>Template:Cite web</ref> To make the tea, the leaves of the plant are boiled in hot water. The lower concentration of toxic chemicals in these teas are less harmful than pennyroyal oil. It is recommended that people only drink pennyroyal tea periodically, as it is taxing on the body and should not be drunk on a regular basis. Consumption of pennyroyal tea can be fatal to infants and children.<ref>Template:Cite journal</ref>

The pennyroyal plant has also been used as an emmenagogue or perhaps most famously as an abortifacient.<ref name="NIH1">Template:Cite web</ref> Chemicals in the pennyroyal plant cause the uterine lining to contract, causing a woman's uterine lining to shed. Women who struggle with regulating their menstrual cycle or suffer from a cystic ovary syndrome may choose to drink pennyroyal tea. Pennyroyal tea is subtle enough to induce menstrual flow with minimal risk of negative health effects. More concentrated versions of the plant, such as the oil, are much more toxic and will likely force a miscarriage if ingested by a pregnant woman.<ref>Template:Cite web</ref> Since the U.S. Congress passed the Dietary Supplement Health and Education Act in October 1994 all manufactured forms of pennyroyal in the United States have carried a warning label against its use by pregnant women, but pennyroyal is not regulated by the U.S. Food and Drug Administration.<ref>Template:Cite journal</ref>

At least one study has shown pennyroyal oil to have potent acaricidal activity against house dust mites.<ref>Template:Cite journal</ref>

Symptoms that may persist after ingesting a small dose (<10 mL) of pennyroyal oil are nausea, vomiting, abdominal pain and dizziness. Larger volumes may result in multiorgan failure that could lead to death. There are no current toxicokinetics studies performed on humans for the effects of pulegone, but there are some studies performed on other mammals. When pulegone is ingested, it is broken down by the liver and reacts to form multiple toxic metabolites that can wreak havoc in the body. Some identified metabolites are menthofuran, piperitenone, piperitone, and menthone.<ref name="ReferenceA">Template:Cite journal</ref>

Studies conducted on the toxicity of pulegone

In the first study listed above, pulegone reportedly had relaxant effects on vascular smooth muscles, myometrium, the bladder, intestine and the trachea of rats. The relaxation effects on these organs can be attributed to pulegone blocking the ion channels for Ca2+ and K+ to enter and exit the cell, respectively. This hinders the ability of the cell to achieve its necessary action potential for a nerve impulse to fire, relaxing the muscle.

In the second study listed, the impact of pulegone on follicular growth in mice was tested. In the mice injected with pulegone, there was much lower follicular distribution per ovary than those not injected. Ovarian follicles secrete hormones that influence a woman's menstruation cycle. Oestrogen levels are lower than normal when follicle numbers are low and it is possible that this can induce abortion or prevent ovulation.

In the third study, carcinomas in the bladder occurred at higher rates among mice that were injected with pulegone. The mechanism of action that causes these effects involves cytotoxicity and regenerative cell proliferation.

The active chemical in pennyroyal is pulegone. Pulegone is a ketone and on the cellular level, ketones can act as enzyme inhibitors. The carbonyl center of the pulegone structure acts as a strong electrophile, causing active sites on enzymes to bind with pulegone instead of the target protein.

The endocyclic double bond found in pulegone is vital to the activation and binding mechanism of the molecule and causes it to be an effective hepatotoxin. When ingested, pulegone targets the liver and kidney, among other organs. Studies have been conducted on rats show that one of the main effects is the inhibition of contractile activity in the myometrium and death by kidney failure. Also found in the study, long term exposure to pennyroyal increased incidences of urinary bladder tumors.<ref name="ReferenceA"/>

The exact pathway pulegone undergoes to be converted to menthofuran is unknown, but one study strongly suggested it included oxidation of an allylic methyl group (from CYP450), intramolecular cyclization to form a hemiketal, and subsequent dehydration to form the furan.<ref name="Gordon"/> Additionally, pulegone and menthofuran may deplete glutathione levels, leaving hepatocytes vulnerable to free radical damage.<ref name="Gordon"/>

There is no known antidote for pennyroyal toxicity.<ref name="NIH1"/> Case studies involving pennyroyal poisonings have reported the use of gastric lavages and administration of emetics, or vomiting inducing agents, like activated charcoal.<ref name="Ilene">Template:Cite journal</ref> As glutathione depletion has been shown to regulate liver toxification, administration of N-acetylcysteine in similar doses as given for acetaminophen toxicity have been given to patients.<ref name="NIH">Template:Cite web</ref>

A study testing pulegone toxicity found inhibitors of cytochrome P450, such as cobaltous chloride or piperonyl butoxide, blocked toxicity.<ref name="Gordon"/> Such testing has not been expanded to humans, however, as the pennyroyal mechanism of toxicity is still not entirely understood.