Morus alba, known as white mulberry, is a fast-growing, small to medium-sized mulberry tree which grows to 10–20 m tall. It is generally a short-lived tree with a lifespan comparable to that of humans, although there are some specimens known to be over 250 years old.<ref>http://www.monumentaltrees.com/en/trees/morusalba/records/</ref> The species is native to northern China, and is widely cultivated and naturalized elsewhere (United States, Mexico, Australia, Kyrgyzstan, Argentina, Turkey, Iran, etc.).<ref name=FoCMa/><ref name=fao>Suttie, J. M. (undated). FAO Report: Morus alba L.</ref><ref>Template:EFloras</ref><ref>Template:BONAP</ref><ref>Atlas of Living Australia, Morus alba L., White Mulberry</ref><ref>SEINet, Southwestern Biodiversity, Arizona chapter photos, description, distribution map</ref>

The white mulberry is widely cultivated to feed the silkworms employed in the commercial production of silk. It is also notable for the rapid release of its pollen, which is launched at over half the speed of sound.<ref name="Taylor et al">Template:Cite journal</ref> Its berries are poisonous when unripe, but are otherwise edible.<ref>Template:Cite web</ref><ref>Berry</ref>Template:Better source

On young, vigorous shoots, the leaves may be up to 30 cm long, and deeply and intricately lobed, with the lobes rounded. On older trees, the leaves are generally 5–15 cm long, unlobed, cordate at the base and rounded to acuminate at the tip, and serrated on the margins. The trees are generally deciduous in temperate regions, but trees grown in tropical regions can be evergreen. The flowers are single-sex catkins; male catkins are 2–3.5 cm long, and female catkins 1–2 cm long. Male and female flowers are usually on separate trees although they may occur on the same tree.<ref>Schaffner, John H. 1919. The nature of the diecious condition in Morus alba and Salix amygdaloides. Ohio Journal of Science 18: 101-125.</ref><ref>Purdue University. Center for New Crops & Plant Products. NewCROP: Morus alba.</ref> The fruit is 1–2.5 cm long; in the species in the wild it is deep purple, but in many cultivated plants it varies from white to pink; it is sweet but bland, unlike the more intense flavor of the red mulberry and black mulberry. The seeds are widely dispersed in the droppings of birds that eat the fruit.<ref name=FoCMa/><ref name=fao/><ref name=bean>Bean, W. J. (1978). Trees and Shrubs Hardy in the British Isles. John Murray Template:ISBN.</ref>

The white mulberry is scientifically notable for the rapid plant movement involved in pollen release from its catkins. The stamens act as catapults, releasing stored elastic energy in just 25 µs. The resulting movement is approximately Template:Convert, over half the speed of sound, making it the fastest known movement in the plant kingdom.<ref name="Taylor et al"/> 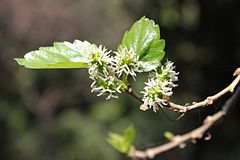 Cultivation of white mulberry for silkworms began over four thousand years ago in China. In 2002, 6,260 km2 of land were devoted to the species in China.<ref name="fao"/>

The species is now extensively planted and widely naturalized throughout the warm temperate world. It has been grown widely from Indian subcontinent<ref name=fao/> west through Afghanistan and Iran to southern Europe for over a thousand years for leaves to feed silkworms.<ref name="bean"/>

More recently, it has become widely naturalized in disturbed areas such as roadsides and the edges of tree lots, along with and urban areas in much of North America, where it hybridizes readily with a locally native red mulberry (Morus rubra). There is now serious concern for the long-term genetic viability of red mulberry because of extensive hybridization in some areas.<ref name="Burgess, K. S.">Burgess, K.S., Morgan, M., Deverno, L., & Husband, B. C. (2005). Asymmetrical introgression between two Morus species (M. alba, M. rubra) that differ in abundance. Molec. Ecol. 14: 3471–3483.</ref>

White mulberry leaves are the preferred feedstock for silkworms, and are also cut for food for livestock (cattle, goats, etc.) in areas where dry seasons restrict the availability of ground vegetation. The leaves are prepared as tea in Korea. The fruit are also eaten, often dried or made into wine.<ref name="fao"/><ref name="bean"/>

In traditional Chinese medicine, the fruit is used to treat prematurely grey hair, to "tonify" the blood, and treat constipation and diabetes.Template:Citation needed The bark is used to treat cough, wheezing, edema, and to promote urination. It is also used to treat fever, headache, red dry and sore eyes.

For landscaping, a fruitless mulberry was developed from a clone for use in the production of silk in the U.S. The industry never materialized, but the mulberry variety is now used as an ornamental tree where shade is desired without the fruit.<ref>Howstuffworks.com</ref> A weeping cultivar of white mulberry, Morus alba 'Pendula', is a popular ornamental plant.<ref name="USDA Plants Profile">Template:PLANTS</ref> The species has become a popular lawn tree across the desert cities of the southwestern United States, prized for its shade and also for its sweet, white fruits. The plant's pollen has become problematical in some cities where it has been blamed for an increase in hay fever.<ref>Pollen Library, White Mulberry (Morus alba)</ref><ref>Thermo Scientific, </ref><ref>University of Arizona Cooperative Extension, Yavapai County, Plants That May Cause Allergies in Yavapai County Template:Webarchive</ref>

Dental caries: The root bark of Morus alba (Moraceae) has been used as a traditional medicine in Asian countries and exhibits antibacterial activity against food poisoning micro-organisms. Using activity against S. mutans in bioassay-guided fractionation of a methanol extract of dried root bark, and organic solvent fractions of this extract, the active antibacterial constituent was identified as kuwanon G. The compound displayed an MIC of 8 μg ml–1 against S. mutans, which was comparable to chlorhexidine and vancomycin (1 μg ml–1). Time-kill assays indicated that S. mutans was completely inactivated by 20 μg ml–1 kuwanon G within 1 min, while testing against other bacteria suggested that the compound displayed preferential antimicrobial activity against cariogenic bacteria. Electron microscopic examination of S. mutans cells treated with kuwanon G indicated that the mode of antibacterial action was inhibition or blocking of cell growth, as treated cells showed a disintegrated surface and an unclear cell margin.<ref>"Kuwanon G: an antibacterial agent from the root bark of Morus alba against oral pathogens"</ref>

An ethanolic extract of mulberry leaf had antihyperglycemic, antioxidant and antiglycation effects in chronic diabetic rats, which may suggest its use as food supplement for diabetics.<ref>Antihyperglycemic, antioxidant and antiglycation activities of mulberry leaf extract in streptozotocin-induced chronic diabetic rats Naowaboot J., Pannangpetch P., Kukongviriyapan V., Kongyingyoes B., Kukongviriyapan U. Plant Foods for Human Nutrition 2009 64:2 (116-121)</ref>