It is native to many regions with a wide scattered distribution: throughout temperate through tropical Africa; and throughout the temperate Northern Hemisphere in Europe, northeastern North America, temperate Asia, and Eurasia.<ref name=grin/><ref>USDA</ref>

This small, hard-to-spot plant can occur singly in unimproved pastures, rock crevices and grassy path-sides, but also can occur in colonies of hundreds of plants in sand dunes.Template:Citation needed 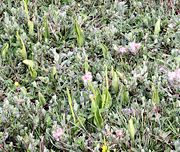 Growing in sand-dunes on Anglesey

Ophioglossum vulgatum grows from a rhizome base to 10–20 cm tall (rarely to 30 cm). It consists of a two-part frond, separated into a rounded diamond-shaped sheath and narrow spore-bearing spike. The spike has around 10-40 segments on each side.

It reproduces by means of spores.

Traditional European folk use of leaves and rhizomes as a poultice for wounds. This remedy was sometimes called the "Green Oil of Charity". A tea made from the leaves was used as a traditional European folk remedy for internal bleeding and vomiting.<ref>Duke's Phytochemical and Ethnobotanical Databases: Ophioglossum vulgatum</ref>